This morning I saw the achingly beautiful set of “Black Marble” images of the Earth at night. Joshua Stevens, of NASA’s Visible Earth team, presented some fascinating comparative images of how some places have changed since the last comprehensive mapping of the Earth at Night, which was 2012.

When looking at them, I thought it might be cool to overlay the 2016 version as a clipping mask to the 2012 version. That way, I suspected, a 2016 cookie-cutter view through to 2012 would reveal to me the previously-unlit areas of 2012, as dark strands of land or growth rings around suburban expansion. And it worked!

So, here is a map where the dark patches are newly illuminated in the past 4 or 5 years. The bright patches were already illuminated back in 2012. 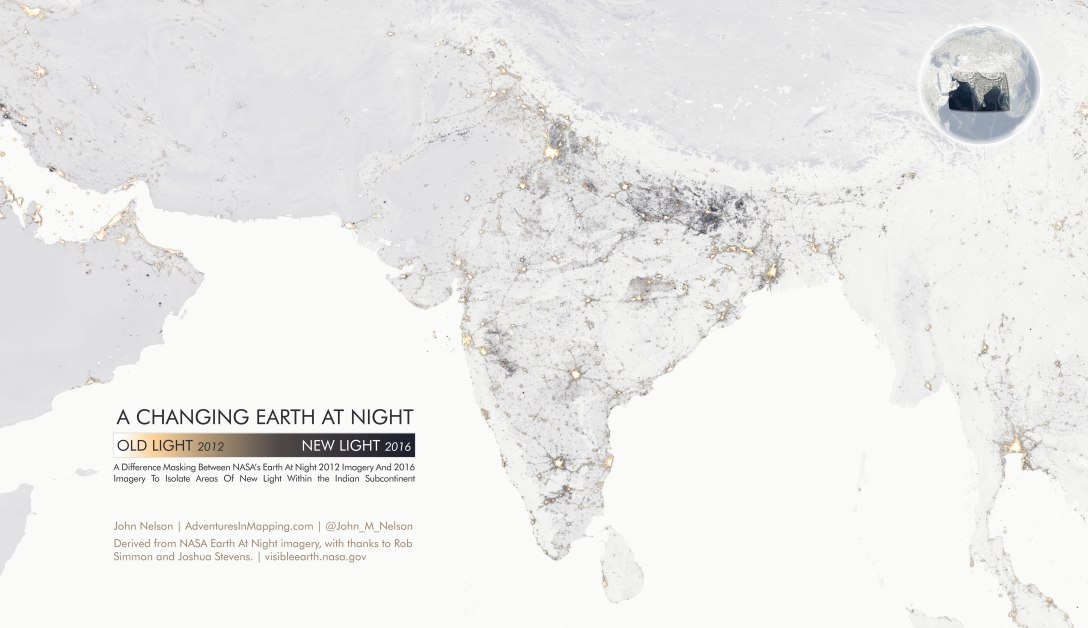 The masking nature of this method means that I’ll not get to see areas that lost light. Only areas that gained light would be revealed. That’s ok -as long as I’m clear about that in the legend.

Most noticeable to me was the electrification of much of the Northern areas of India. At the base of the Himalayas, vast expenses of new nighttime light (shown in blue) emerge over the past five years, surrounding and connecting areas previously illuminated.

In the UAE, and parts of Oman, distinct stretches of new highway are etched out of the desert, shining brightly now where there was just nighttime darkness a few years ago.

In southern parts of India, urban growth is especially apparent. Whole growth rings emerge from around the urban centers, carving out new areas of nighttime illumination.

And that’s all I have to say about that.